The first time I became aware of Tidal Blades: Heroes of the Reef was when I saw an ad for its upcoming Kickstarter on Facebook. It immediately caught my eye with its beautiful blue ocean scenery and vibrant character designs. I excitedly waited for the game to hit Kickstarter, skimmed over the campaign page, and backed it immediately, going all-in for the deluxe edition. As beautiful as even the basic version was, I absolutely could not pass up all the fantastic extras, from the miniatures and squishy fruit counters to the dice tray made to look like an arena. I chose to back all of that, only vaguely being aware that it was a worker placement game with some dice rolling involved.

More than any other game I have bought or kickstarted, I was excited to open it up and look at the components even more than I was to play the game. I had followed along with their updates and read the many fictional short stories that helped flesh out the world. This was going to be a game dripping with theme, and I couldn’t wait to see how they brought it all together in what would hopefully be a fun game.

When it arrived, I didn’t waste any time ripping the plastic wrap off the box and pulling the lid off. It was so beautiful. I was instantly thrilled with my purchase. Then I skimmed through the rulebook, saw all the rules about different in-game events, how to upgrade your dice in multiple ways, and that there are tons of ways to get points and… I decided to learn something easier until I could watch some videos of the game being played.

My instincts that this could be a challenging game to learn were only partially correct. The rulebook is well-written with plenty of examples. I realized that this big game was just a combination of several mechanics I was familiar with from other games. There was worker placement, character progression, dice placement, and set collection all brought under the lid of one board game box. In my first playthrough, I still missed a ton of little rules because there is so much going on and so many different mechanics that it’s hard to take it all in right away. However, by our second game, I had a much better handle on how the various parts worked together.

In Tidal Blades, you play as one of four asymmetric characters competing for the chance to become a Tidal Blade, a sort of appointed hero for the city. You start the game with your character board which has four dials that allows you to upgrade each of your four stats as the game goes on, a secret goal that will get you some victory points if you are to achieve it, a character card detailing one of your unique abilities, and two basic dice thare are rolled to try and complete challenges.

Throughout four (or five rounds depending on the number of players), you will be moving your character to any of five different islands. Each island has a special action you can always take and a few spaces that allow another action. As your character takes their turn, they will leave behind action disks on spaces that prevent others from moving there. While you start with only two movements, you will gain more actions per round as the rounds progress, eventually ending up with four.

The actions you can take might gain you some resources in the form of shells, fruits, new dice, challenges you can complete at specific islands, or let you fight the monsters threatening to invade the coastal city.

The challenges and monster fights involve you rolling the dice that you’ve accumulated and a special challenge die that makes things more difficult as the game progresses. For both of these actions, you are looking for specific symbols on the dice to match up with what is required to beat the challenge or hurt the monster. Once you have used your dice they become exhausted, only to be refreshed at the end of the round, or by visiting certain spaces on the board. Or if you use your dice to harm monsters, you will lose those dice and need to find a way to replace them.

As you play, you can upgrade your dice along two branching paths. That will improve your chances that certain symbols will appear. You can also upgrade your character by having successes in challenges. These upgrades will allow you to roll more dice, refresh and upgrade more dice, get special character cards to give yourself unique abilities, and make performing stunts, which are another type of card you can acquire, more powerful. You can also gain fruit, which can be used to roll an extra die that you have, and to purchase things in the market and shells that can help you keep from losing dice while doing a challenge if the special challenge die rolls any Xs.

Many of these things will give you victory points, and so you can try to focus your strategy in any direction. Trying to play with a different focus each time adds to the game’s replayability, especially when you couple this with the unique abilities each character can acquire.

I really enjoyed taking actions on the different islands, each having its own theme. I could imagine my character trying to complete all the tasks to impress the judge, who also travels from island to island. They worked hard to make the world of Tidal Blades feel like a living, breathing world, and it shows. The dice rolling may turn some off, but there are many ways to mitigate bad die rolls, so it becomes more challenging to manage your resources well than just random luck.

The game is incredibly fun and overall well-put-together, but I do have a couple of gripes. First, as much as I love the character progression as a concept, I thought that I would be able to make my character better than what actually seems possible by the end of the game (unless that is all you do). I didn’t expect to be able to max out everything and knew there would be tough decisions, but it still feels like by the end of the game, even if you win, your character isn’t ready to be the hero of the city. They may be great at rolling a lot of dice, but can they pull off impressive stunts, or do they have a bunch of abilities to help them be a better hero? Probably not. Or they’re just a tiny bit good at everything, but not very impressive in anything.

The other issue I have is with the monster battles. Dealing with monster battles seems pretty important since they could attack at the end of every round, and you can only be made safe from whatever adverse effects they will have if you have put some damage on them. In addition to this, every bit of damage you do to them gains you a victory point at the end of the game. The problem is that you lose every die you use to hurt them. There are ways to get more dice, but you are using your actions to do that instead of other things. Since you need dice for so many things, we rarely found fighting the monsters worthwhile until the very last turn of the game. You could focus on just that to get those victory points, but then all you will be doing is going to places to get dice again and then fighting, over and over. Maybe that would be worthwhile, but it’s also a boring way to play through the game. Perhaps if the monsters made it harder to mitigate your luck instead, it would feel like a better risk to take. But as it stands, it’s just not a very interesting way to secure the win, and it takes up too many of your actions to jump into the occasional fight, only to have to get more dice to accomplish anything else.

This is a game that is great for some people but won’t be for everyone. While each part of the game is pretty easy to come to grok, there are many parts to the whole. My wife plays games with me all of the time, but while learning Tidal Blades, she needed to jump in and start playing to get a handle on it because there were so many things to take in. I think people who play a lot of games will learn it without too much difficulty, but you don’t want to bring this out to people who prefer light games, and you definitely don’t want to use this to introduce someone to gaming unless they’re very willing to try to take on a lot at once. Whereas people who like heavier games may have to be talked into the dice rolling. I think most gamers could grow to love this game, but there could be some hurdles initially because of how broad the gameplay is.

Overall I really like Tidal Blades: Heroes of the Reef. I’m very happy with my purchase, even though I probably went a bit overboard with getting every single deluxe bit I could. Although, there are people that I game with who will probably never want to play this, and I think even for me, it’s going to get played when I am in a particular mood for it. Because of that, I’ll likely keep it on my shelf and always come back to it, but it probably won’t be a game I play frequently. That isn’t a negative though. When I am in that right mood, I’ll always be happy to return to the world of Tidal Blades. 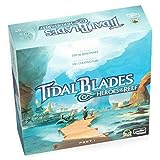 Tidal Blades
Check Price on Amazon
Note: Board Game Squad is reader-supported. When you buy through Amazon links on our site, we may earn an affiliate commission.