The following is a guest post from contributor Anthony Ball.

The front of the box is very pretty and shows someone being given a gift which is the theme of the game. The back of the box has a good description of the game and background information regarding the game’s theme. It also shows the full game board and player boards along with a list of the game components. The main board and player boards are all made using thick good quality cardboard and have lots of vibrant colors on them. Each player has several wooden components, a lot of cubes and a couple of custom pieces. The cards are a little small but have great thematic images of the gifts you are giving in the game. The remaining components are the dice which are very light.

The aim of the game is to have the most victory points at the end of the game. The game is played over 4 rounds, each of which is split into 3 different phases. First there is the morning phase, in which the board is reseeded, start player assigned, destiny dice set-up and decree advantages applied. After, it’s the day phase. Most of your action take place during this phase.

The first is “travel”, where you can move your traveller one space or two spaces by paying 2 servants. The tokens you collect are added to you player board and you get their bonuses immediately. These bonuses will generally do things on other parts of the board.

The “intrigue” location allows you to move one step on the intrigue track and take the next first player marker (meaning you are the start player next turn). Alternatively, you may pay one servant to move 3 steps along this track. When the wall is scored, you can move back on the intrigue track (as long as you are present on the wall) in order to get a bonus such as more servants or a jade for free.

The next spot is the “jade” location where you exchange servants for jade. Jase is worth end-game victory points. As jade is taken from this location, the price increases for the next jade you purchase.

The next location is “the palace” where you can either advance your official one space up the palace track, or pay 2 servants to move up 2 spaces in addition to one step on the “intrigue” track. The player that gets to the top of the track first will score the most end-game points followed with the amount of points decreasing with each subsequent position. It should be noted that if you are not top of the track at the end of the game you cannot win the game no matter how many points you have.

The “decree” location allows you to exchange servants for bonuses during the game. These vary in cost, with the level one tiles giving you a bonus at the start of each turn such as an extra servant or a palace movement for free. Level two decrees will give you reductions for actions such as traveling 2 spaces only costs one servant instead of the normal two. Level 3 tiles score end-game victory points for various achievements throughout the game.

The final location is the most complex. The “Grand Canal” is where you can use your boats to gain various bonuses. You can place a servant on a boat that is already launched and optionally move it one space, or you can pay 1 servant to place two servants onto a launched ship. When you have a boat with 3 servants on it, you can remove it from the board and take the bonus associated with that spot. This can be a new card increasing your hand size, 4 points, or get a special double servant which can be used in various locations.

After all players have played all the cards from their hand, you enter the night phase. Here, you check how many of your taken cards match the “destiny” dice that were rolled earlier in the turn. You get a servant for every match, and the player with most matches scores 3 victory points and earns a palace movement. All ships then move one space forward and the game moves to the next turn.

After all 4 turns have been played the final scoring takes place. First, the wall scores one final time, this is followed by level 3 decrees, palace track points are added, and finally jade scores based on how much you have collected. The player with most points wins!

The turns in the game are relatively straightforward and the game has a nice simple flow to it. The game can be played with 1 to 5 players, with the solo mode being played against an automa deck of cards. The automa exchanges cards like a human player and takes actions to score points. This means the solo game plays much like a multiplayer game where you simply need to defeat your opponent by scoring the most victory points.

The game is highly thematic. This by in part due to the excellent artwork, but even more so because the concept of gift exchanges during the reign of Longqing Emperor is so deeply embedded into the core mechanic of the game. You really do feel like you are exchanging gifts. The actions for the most part match the theme. Although, the palace track is a little strange as you have to get to the top before scoring any points rather than points being based on how high up on the track you are.

The average playtime of the game is about 25 minutes per player (the solo mode take around 45 minutes due to managing the automa).

The game plays very differently at lower and higher player counts. At two players you can plan ahead as you know only one card will change on the board before it’s you turn again. This means you can decide where you want to go and have a backup for your next action. In a 4 player game, 3 actions will have changed. This makes the game more tactical and you need to take the action that is best for you at that given moment.

On your turn you will have several choices as to how you may use the cards in your hand. As long as you have servants or a card to discard you can take any action on the board regardless of value. However, it is more efficient to place a better gift on a location and will give you more options for the rest of your turn. The game is essentially 6-7 mini games which can generate points either instantly or at the end of the game. This means you should try not to spread yourself too thin and servant management is very important. Placing too many servants on the wall, boats or decrees can leave you short for your next turn or not allow you to buy jade. That being said, there are plenty of ways to get servants back from once they have been played such as with traveling tokens and gift cards. Where possible you should focus on 2 or 3 of these locations and make sure to maximize your points. You have to go up the palace track to have any chance of winning and the earlier you get up this track the less you have to worry about it towards the end of the game. Also, if you get to the top of this track you will score victory points.

The decree location is especially powerful. If you are not the first person to claim the decree you want, then you must pay an additional servant in order to acquire it. It is important not to let someone get a lot of these decrees as they can be worth a significant amount of points.

It is also important (if possible) to go up the intrigue track since it is the tie breaker in the game, and can sometimes win you the wall or the dice matching bonus at the end of the round.

Travel tokens can let you be really efficient with your actions, allowing you to take actions on other parts of the board without placing a card in that location. You should always look if there are good opportunities there to get bonus points or actions when it doesn’t look like it might be possible on the actual action space.

The final thing to mention is the double servant. The double servant can allow you to score points from the wall quicker by filling it up faster than your opponents. It also allows you to fill your boat faster and thus unlocking more potential bonuses for you. Although I don’t find it necessary to win, it is a very powerful piece and should not be overlooked. I find that taking the extra card on the canal as a reward to get an extra action each turn to be just as powerful as the double servant.

As previously mentioned, there are multiple paths to victory and which path you take will depend on how other people play their cards. This means you need to be able to adapt your strategy as the game-state changes.

The game is fairly easy to pick up and most new players will be able to play with more experienced players almost straight away. The game is highly replayable as the way the cards are placed and the large number of decree and travel tokens makes sure that the starting board is never quite the same.

The game ends after 4 rounds so you can see the end-game coming easily. The end-game scoring is very simple and is depicted on your player mat so you can easily keep it top of mind.

The game is medium-weight complexity. There are plenty of ways to score points and you need to be very aware of what other players are doing and blocking them where possible. Your turns can also change due to the board changing multiple times before your next turn so does require more thinking than you would expect.

The clear iconography on the board really helps with taking actions.

The rulebook is easy to understand with the only confusing part being how to resolve the boat action and when you can take the bonus.

The game takes up a lot of table space and with the personal player boards, it can look overwhelming especially with all the iconography dotted around the board. However, when you play the game you see that this is all necessary and isn’t as intimidating as you initially would think.

The setup and teardown of the game takes a while, about 10 minutes as there are lots of pieces to randomize and put on the board.

Gùgōng is an excellent and unique mid-weight worker placement eurogame. Of all the games that I have played in the past 18 months, this feels the most unique with its gift exchange mechanism. Everyone I have introduced this game to has enjoyed it greatly and over time I have come to appreciate the game more as I can now see better strategies than when I first played it.

It also has a really excellent solo mode that requires a little bit of upkeep, but feels exactly like the 2 player experience. The game is highly thematic and the artwork really helps enhance the experience. There are a lot of different ways to win this game. This is something that always appeals to me as it gives excellent replay value. 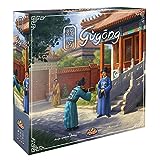 Tasty Minstrel Games Gugong
Check Price on Amazon
Note: Board Game Squad is reader-supported. When you buy through Amazon links on our site, we may earn an affiliate commission.