The following is a review from guest contributor Anthony Ball.

The front of the box is quite stunning with what appears to be a town burning in the background and 6 warriors fighting off a horde of zombies. It also shows that the game is set in the medieval period.

The back of the box is functional and well organized. It shows the various types of miniatures it includes, a typical board setup, and a short summary of what to expect in a game.

The quality is really striking when you open up the box. Inside are two smaller, self-contained boxes which contain all of your miniatures and the player boards. The miniatures are exceptionally detailed. For each enemy, there are multiple sculpts, which is a really nice touch. The zombie types are easy to distinguish from each other in terms of both size and stance.

The player boards are also good quality, made from molded plastic and have holes where pegs can be placed to track health and special abilities. There are also recessed slots for weapons and armor along with a track to monitor your experience gained during the game. This makes managing your character during the game exceptionally easy. I really appreciate the amount of thought that went into designing these boards.

The map tiles are intricate, with little details that bring the world to life. Although, I do find some of the doorways a little hard to see and less of a dull finish likely would have helped improve their visibility.

As with everything else in this game, the cards are quality, sporting a linen finish with very nice artwork and clear text.

The rest of the cardboard tokens used for various objectives and spawn locations are also well made, but a little bland in presentation compared to the other components in the box.

The aim of the game is to complete the objectives for the particular scenario you are playing while making sure at least one character survives. If all characters are dead, or there are too many spawn points (>6) on the boards from necromancers escaping, then all players lose. For each scenario you need to play with all 6 survivors and these are dealt out evenly between the players.

On a given turn, each survivor has up to 3 actions that they can take. Once they have leveled up, they will gain a fourth action. For each action you may move one zone on the board, search a location and get an item of loot, open a door, trade with an adjacent player, engage zombies with an attack, take an objective, make some noise, or simply pass. In most cases you will be moving a couple of times a turn and either attacking or trying to take an objective from a building.

When attacking, you will check your weapon and roll a number die, check to see how many successes you got (again dependent on the weapon), and then receive the corresponding hits on zombies within the range of that given weapon. In most scenario cases, you will need to find specific objectives locked behind doors while killing a certain number of zombies and possibly escaping.

Killing zombies will give you experience, enabling you to level up and gain more powerful abilities. Although when you are do so, you’ll need to loot better equipment in order to deal with the increased number of zombies (or the possibility of more powerful ones spawning) that result from this.

After players have taken all their actions, the zombie phase will begin. First, zombies on the board will activate once (or twice in the case of the runners) and either move towards survivors they can see or hear. If a zombie already shares a spot with a survivor, it will attack them and deal 1 damage, or 3 if it is an abomination.

These attacks can potentially be blocked by armor, unless it is an abomination, which ignores armor rolls. If a survivor has taken 3 damage, they are dead and removed from the game board. This means that you are one step closer to losing. After zombies have activated, spawn points on the map will activate one at a time. The top card of the spawn deck will be revealed and zombies will spawn depending on the highest level survivor on the board.

If you were ever to need to put out a certain type of zombie and there are none in the supply of that type, it will simply result in an extra activation. The game will continue this way until the game is lost or won.

The turns in the game flow quickly since there are only 3 to 4 actions per survivor and clear goals in mind. The game is fully co-operative and can be played solitaire. Although, this does require that you to manage 6 characters at once, which can be a little challenging.

The theme of Zombicide: Black Plague is super strong primarily due to the game board and the miniatures painting a picture of the world. The excellent presentation and great artwork on the weapons make you feel like you are really fighting off the zombies. The dice rolling also helps contribute to theme, in that you feel like you are swinging that sword and firing those arrows, dealing with uncertainty and waiting to see if you are going to damage the zombies or not.

The average playtime of the game depends on which scenario you are playing. For the most part, I have found that the time written in the rulebook is pretty accurate. This means that you can simply choose a scenario based on how long you want to play the game. These vary between 60 and 180 minutes. The game can drag a little, but only if one or two survivors remain and there are a lot of zombies on the board. Part of this is psychological, as you know you are fighting a losing battle.

The game plays similarly well at all player counts, since 6 survivors will need be controlled no matter what. However, due to player elimination, I think its best that each player has a back up character to play. For that reason, I think 2 to 4 players is best. Higher player counts may result in someone having to sit out and playing solitaire requires you to manage too many survivors by yourself.

On a given turn, you will probably only have a couple of real options. You either want to rush to get objectives or deal with the ever amassing horde of zombies. However, you must be careful not get too many objectives or kill too many zombies with just one character. This will result in one very strong character, forcing more zombies or more powerful zombies to spawn and the other lower level players might not be able to deal with them as easily.

In the early game, it is important to loot and get better equipment. Only one survivor can kill “fatties”. They take 2 damage to kill, meaning finding higher power weapons is crucial in order to clear them off the board. The only way to kill abominations is to get a dragon bile and torch combo since they require 3 damage and can wipe out survivors with ease.

Obtaining better shields increases your ability to survive multiple zombie attacks, causing you stay in the game longer and giving a better chance of victory.

Each character has different powers. Where possible, you should try to strategically play into the strengths of these powers. For instance, if you have bonus spell cast, you should get better spells. If you get an extra die for melee attacks, you should get a melee weapon.

There is also a concept of targeting priority when attacking zombies, with runners being harder to hit than any other enemy. So, you shouldn’t let too many zombies build up on a single square or you might not be able to target the particular zombie you want to kill.

You should also try to avoid attacking into a square with another survivor because any miss attacks will hit them instead. The game is hard enough without killing each other.

Killing necromancers is also a major strategic priority in Zombicide: Black Plague. They can cause you to lose the game by increasing the number of spawn points. They do this by moving to the nearest spawn point, and if they escape to it and exit the map, a new permanent spawn point is added.

There is also an interesting benefit when you kill the necromancer. When you do so, you may choose any spawn point to remove, not just the one that it came from or created. This means, if one side of the map has too many enemies or you want to have clean access to an objective, you can remove a spawn point next to it instead. This has proved invaluable in a few games and should not be overlooked.

With the multiple different scenarios and different map layouts, along with the random draws of the equipment and zombie spawns, no two games are the same. So, although objectives are similar from game to game, the games will feel different and their are multiple paths to victory you can experience.

The game is very easy for new players to pick up, and after a few turns they will be able to play as well as experienced ones.

As noted above, the game is very replayable. The different powers each character has and the fact that at each level, you must choose which ability to improve, also adds to this replayability.

The game end is usually fairly easy to see coming and it is very straightforward to work out if you have won or not.

The game is a light to medium weight and is very easy to learn. The back page of the rulebook has a complete game summary, so new players can look at this for their first few turns to help them play.

The rulebook is very well done, rich with with clear images, excellent practical examples, and scenarios that are clearly laid out with win and loss conditions.

The game can seem a little daunting on the table due to its large table size and the miniatures, but when players actually sit down and start playing, they will see how easy it is to play.

The setup time takes quite a while as you have to replicate the map and find the right tokens. All in all, it takes about 15 minutes to setup, with the teardown being significantly faster. Tear down is aided by pictures showing how to put the miniatures back in the box.

There is no iconography in the game. The only thing needing to be referenced is what each player power does on their board.

This game is pure fun with excellent miniatures. The miniatures help enhance the game’s strong theme. And although in the game you are subject to some luck of the draw with the spawn decks, it doesn’t really matter because you are having such a good time attacking the zombies and throwing dice.

It feels exciting when you are searching for loot. You are never quite sure what you might find. Will it be a new shield, a better weapon, or possibly even a zombie? 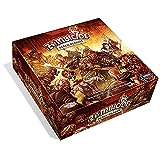 CMON Zombicide Black Plague Board Game (Base) | Strategy Board Game | Cooperative Board Game for Teens and Adults | Zombie Board Game | Ages 14+ | 1-6 Players | Average Playtime 1 Hour | Made
Check Price on Amazon
Note: Board Game Squad is reader-supported. When you buy through Amazon links on our site, we may earn an affiliate commission.