Cowboy Bebop: Space Serenade is in many ways a fairly basic deck builder, but it does have some interesting twists that keep it from being just another Dominion or Ascension copycat. So the big questions here are, is this game different enough from other deck-builders to give it a shot? And, is the theme integrated into the game well enough to capture the feeling of the popular anime? Here are my thoughts.

In Cowboy Bebop you and your fellow players are each going to pick a character from the anime: Spike, Ed, Jet, or Faye. While you aren’t enemies exactly, you are competing to collect the most bounties, and therefore the most Renown, by the end of the game.  Each character has a first and second unique special ability, and four out of their ten starting cards that are unique to them. You’ll start the game with your miniature (or standee) on the space ship Bebop. If you are playing with fewer than four players, you will still put the models for all four characters on the ship. I’ll tell you why shortly.

There are three planet locations you can travel to, and each will start out with a criminal you are trying to collect a bounty on. Each criminal will have two stacks of tokens on them.  One type you can remove by using Clues, while the other by using Strength, which are two of the resources you can get in the game by playing cards.  You tend to need more clues to get a token, but using Strength to get one will always give you a Damage card in your deck.  Once one of the stacks is depleted from a criminal, all players that have some of the tokens from that criminal get Renown points which count as victory points at the end of the game. The player who actually caught the criminal takes the bounty card and can also get Renown points at the end of the game for those.

As criminals get caught, new ones enter the board which can cause a planet to take more Fuel to move to. Fuel is another resource in the game, but unlike the others, you retain it from turn to turn.

Eventually, you will pull out the Bounty Card of the character Vicious. After that, no new bounties will come out and the game will end when either he is caught or manages to escape. After that players add up their Renown, and the player with the highest amount wins.

Earlier I mentioned that you use all the models even if you don’t have the full four players. This is because there are cards you can get to move players to different locations, even non-player characters. The reason you might want to do that is if you share a location with another character, you can use their first special ability. This makes your location on the board very important both in terms of trying to capture the bounty you want and making use of the other characters’ powers.

At this point, I’d better address those questions from earlier. Does this game do enough to set itself apart from a basic deck-builder? Personally, I think it does. While it isn’t a huge departure from the tried and true formula, paying attention to your and your opponents’ location adds a really nice twist to how you plan out your next move. Also, with Fuel, Woolongs (money), Clues, and Strength, there are more resources than I typically see in a deck-builder. It’s safe to say that if you’ve played a deck-builder, learning this one will be no problem, but it definitely can sit in your collection alongside others without feeling redundant.

Does it capture the feel of the show? While you can get cards in your deck that are associated with the other characters, if you tend to stick closer to cards associated with your own character and use their unique powers, they do feel like the characters from the show. Jet, the pilot, has a lot of cards that can move characters around. While Faye seems to have a lot of abilities that give her some really good purchasing power. Running from place to place to collect bounties, and getting your shipmates to help you out while still being competitive with each other just feels right. The good news is that even those unfamiliar with the show should have no trouble enjoying it as long as the idea of space bounty hunters isn’t a turn off for them.

I’ve also tried the solo mode for this game. It has just a few minor rule changes, and it’s fairly decent. But the thing that prevents me from recommending it as a solo game is that there is no win/loss condition. You are basically playing to get your best score. That can be fine when the game provides you with some kind of idea of what different ranges mean, like the method used in Cartographers where 0-10 points might mean you’re a “rookie”, and each further bracket of points gave you a more impressive title, but Cowboy Bebop does not. I can only get my score and know if I did better or worse than last time. But did I actually play well? I have no idea.

The components of the game are really nice.  Each different section is its own board with recessed areas for keeping track of fuel using plastic cubes where needed. There is a “Big Shots” stand for the Bounty deck that does it’s job well. You can play with miniatures or standees, and while the miniatures aren’t loaded with detail, they look convincingly like the characters they represent. The card stock is decent but not amazing quality, so if you think you’ll be playing it a lot, some card sleeves might be in order. 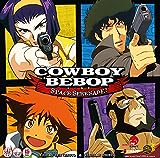 Cowboy Bebop: Space Serenade
Check Price on Amazon
Note: Board Game Squad is reader-supported. When you buy through Amazon links on our site, we may earn an affiliate commission.