Playing it with a group of close friends felt a lot like poker night. I believe that’s no accident, and that this game can fill a very important niche for any board game enthusiast: getting people who know and enjoy games like poker turned on to modern strategy games.

It does this through its excellent set of mechanics, which compliments the core of Guardian’s Call: bluffing and set collection.

How to Play Guardian’s Call

In the box, you’ll find three decks of cards: “Quests,” “Treasure,” and “Guardian Cards.” Collecting sets of the latter is the most basic goal.

Every type of card will gain you victory points in slightly different ways, and affinity for one will lead you toward a different style of play.

On your turn, you’ll draw cards from either the deck (face-down) or market (5 cards face-up, replenished at the start of your turn from the deck) into your hand. Your hand has a maximum size of six cards, and its sole purpose is to make offers to other players.

As the final action of your turn, you MUST make an offer to another player. Pick some number of cards of the same set from your hand, and place them face-down. You will then offer the pile to another player. You may choose to lie about which type of card you’ve offered, or tell the truth. Depending on whether or not you’ve lied and whether or not they’ve accepted the offer, one player will add the cards to their tableau and the other will receive a coin from the bank. All offers can be either honest or dishonest, with the exception of curses. Curses must always be bluffed.

Often apparent in games revolving around trading resources with other players are “closed loops” where the players who give the most generous deals are preyed on, while the players who are unwilling to compromise are ignored.

This effect is mitigated in Guardian’s Call with a simple rule: you cannot make an offer to any player twice without making an offer to every other player.

Your tableau is made up of sets of cards, which you will have face-up, and arranged into piles.

End-game scoring is primarily based upon the cards you have in your tableau, which can be affected in a variety of ways.

First and foremost, cards will mostly be added through either accepting them in offers, or successfully lying when making an offer.

They can also be removed from your hand. For example, when you have a set of three artifacts in your table, you may (at any point during your turn) discard the set and gain a Treasure card. This is generally a very good idea, since Treasure cards are worth a huge number of victory points.

It’s worth noting that the amount of points offered by Treasures varies wildly, even though they are the same cost.

Being cursed is another way to lose cards from your tableau. If you receive curses from an offering, you will take the action corresponding to the number of curses as shown on your player board, then discard the curse cards.

The last way to add cards to your tableau is to purchase them directly from the market during your turn for three coins.

Each type of Guardian card has a special purpose, which you will find written on your player board.

Having the most, or second-most weapons of any player will award points.

As previously mentioned, three artifact cards may be discarded in order to pick one of two Treasure cards.

When you add villager cards to your tableau, you will move your character miniature along the castle track (a separate board you’ll find in the box). Hitting certain thresholds on the castle track before other players will award you victory points, as well as during mid-game and end-game scoring. When you end your turn with your miniature in the same square as another player, yours will advance by one (which can sometimes cause a chain reaction).

Spells are wildcards that can either be added to an existing pile, or made into a separate pile whose type can be assigned later by adding a different card on top of it.

Each player character has an affinity for one type of card (noted on your player board). This means, that will receive one coin from the bank for each card of that type which they receive from an offer.

As previously mentioned, on your turn you may purchase a card from the shop for three turns and add it directly to your tableau. When a curse is in the market, you may (on your turn) remove it from the game for five coins, in exchange for five victory points.

Shuffled in somewhere around the middle of the deck will be the “Council” card. Once this is drawn by a player, they will complete their turn and proceed to mid-game scoring.

At the beginning of the game three quest cards will be revealed and placed next to the castle track. Once the Council card is drawn, all players who have completed quests labelled “Council” will receive the appropriate amount of victory points.

There are some additional ways of scoring point during end game. These include things like a very small bonus for unspent coins, and a very large bonus for being either first or second on the castle track.

Somewhere in the last quarter of the deck lies the “War” card. This is functionally identical to the Council card, except for that it triggers game end after the player who drew it completes their turn.

Guardian’s Call turned out to be a fascinating case study in both having a fulfilling strategy and keeping the feel of a guy’s-night poker game. Its fairly simple but juicy gameplay is inviting for people new to modern board games and intriguing for hobby enthusiasts.

There are some things I didn’t love about this game though. There are a lot of edge-cases in the rules which came up during my play, and some things which didn’t make a whole lot of sense to me.

Some of the quest cards are poorly written and fairly confusing, and some force you to do things like remembering all the curse cards you’ve successfully offered over the entire course of the game.

Lastly, the fact that treasure cards can differ by a factor of two, despite the fact they take the same effort to get, make them too luck based.

The mechanics of games like 5-card draw are almost entirely luck based. If played by entirely new players exactly according to its rules, you’d miss out on what actually makes it fun and interesting: the metagame. The real fun of poker comes from acting in exactly the right way in order to force players to fold, trying to have the most money possible in the pot when your cards are good, and bluffing/reading other players’ bluffs. These are what I’m going to call the motifs of Poker.

Its mechanics, on the other hand, are succinct hands where (based primarily on luck and knowledge of which hands are better) you will either gain or lose some of your sole resource—cash, and eventually will have to drop out (or win).

In Guardian’s Call, the motifs of poker are turned into mechanics. Bluffing is less inherent in every action, and more of a skill which you’ll use in very set instances. Additionally, instead of trying to slow the loss of your money and being pleasantly surprised when you win a hand, you are constantly trying to make small gains each turn in order to build up the most points.

In each turn, you build a little bit, have a little bit of luck in terms of what cards you get, and then have a tense moment with another player as you make your offer and they have to quickly figure out whether or not you’re bluffing.

This turn flow is how Guardian’s Call really captures the feeling of Poker, with the additional mechanics making the game a little more strategic and inviting by creating a metagame that is overt rather than hidden behind experienced gameplay. 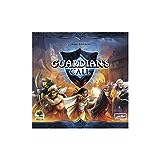 Guardian’s Call | A Hero Fantasy Inspired Board Game of Deduction | Competitive Fun for Teens and Adults with Miniatures, Great Replay Value | 2-5 Players, 30-45 Minutes, Ages 14 and Up
Check Price on Amazon
Note: Board Game Squad is reader-supported. When you buy through Amazon links on our site, we may earn an affiliate commission.