Making it as an artist is no small feat. It’s a cruel, challenging world out there and good art often goes unappreciated. So when I told my mother my ambition of opening an atelier and taking the 19th century art world by storm, she simply laughed at me and exclaimed, “you’re going to need some pretty lucky dice rolls my son”!

Atelier: The Painter’s Studio is a dice-based action selection game for 2-4 players, published by AEG. A game of Atelier runs about 30-45 minutes and makes for an excellent gateway board game.

Players of Atelier compete to collect the most victory points by acquiring paint of various colors in order to create famous paintings, attract & satisfy patrons, and leverage inspiration—all with the power of dice rolling.

How to Play Atelier

Seven painting cards are placed out, front side up and visible to all. The rest form a face-down deck.

Form a pile of accessible inspiration tokens and make the +4 point first master token available for the end game trigger.

The paint cylinders are divided into piles by colors and made available to all of the players.

Each player is then given a player board, two patron cards (but only one is kept), their twelve student meeples, one inspiration token, and the four dice in their player color.

At the start of the game, each player places one of their student meeples in front of one of the piles of paint cylinders.

On their turn, players roll their dice and can either spend one or more of them to perform actions based on their values, or spend any inspiration tokens to perform a set of different actions if they have any at their disposal.

Players can exchange a die of value 1 or 2 in order to place one of their student meeples in front of one of the piles of colored paint cylinders.

A die value of 3 may be used to move a student meeple belonging to each player to another pile of paint cylinders, including their own. A player does not have to move a particular player’s meeple if he does not want to do so.

Spending a 4-pip die allows you take paint from each pile for which you have the most student meeples.

If you roll a die with a value of 5, you may use it to purchase one of the seven face up paintings. To do so, you must spend the required paint, and maybe return student meeples from the paint piles to your personal supply. Be sure to look out for masterpiece paintings, the ones that have a star icon on them.

You can exchange a value 6 die for any paint cylinder regardless of student meeple location.

Some of the painting you purchase will unlock special abilities that you may use on your turn.

Instead of spending your dice for the above actions, you may always pass and exchange one of your die of any value for an inspiration token.

Inspiration tokens are used for the following actions:

If you spend 1 inspiration token, you are may re-roll all of your dice.

If you spend 2 inspiration tokens, you may paint a painting as if you spent a value 5 die.

Lastly, if you spend 3 inspiration tokens, you may take a new patron card from the patron deck.

Some of the painting cards are denoted with a star on them. These are masterpiece paintings. Once a player has painted three masterpieces, that player will earn the +4 point first master token, and one more round will be player by all.

Players then add up victory points from completed paintings, the first master token, and patron cards. The player with the most victory points is the winner!

Atelier: The Painter’s Studio was a major surprise to me. It didn’t received much attention at its release, but it’s a very fun game with a great theme. I can recommend it both as a gateway game or for serious hobby gamers who are looking for some lighter, shorter fair at game night.

There’s a great push and pull between players as student meeples are moved between piles of paint cylinders. It makes for player interaction almost every round, often thwarting your opponents’ plans to acquire enough paint to paint a painting. And right as you’re about to make a monster move yourself, another player beats you to it.

The special powers on the painting cards make for some interesting decisions. Do you purchase a lower point card that helps you build an engine and hope that its special ability will make earning other paintings easier in the later game? Or, do you go straight for those high-value cards?

The theme is inviting. If you’re at all interested in art or art history, then this is the game for you. Every single painting card is a famous work of art from the 19th century. Every patron card represents a famous painter from the era, presumably established artists with some clout that can aid in your endeavor of achieving infamy with your artist studio. I enjoy looking at all of the card and reading some background information about them on Google as I play.

For the most part, the production of Atelier is stellar. Beyond the artwork on the cards, your player board is shaped like a traditional paint pallet and the inspiration tokens are shaped like a man wearing a beret. There are colors popping out the wazoo.

The only criticism I have is relatively minor. The tokens and player boards are one sided, with an ugly matte black finish on the opposite side. However, at no point did it detract from my experience. This is a beautiful game both in gameplay and visual design. I give it my recommendation. 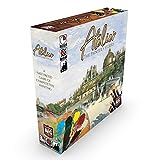 Atelier: The Painter's Studio
Check Price on Amazon
Note: Board Game Squad is reader-supported. When you buy through Amazon links on our site, we may earn an affiliate commission.