The following is a guest post from contributor Anthony Ball.

The front of the box is striking, displaying a beautiful greenhouse surrounded by vegetables. The back of the box shows the game board and gives you a good idea as to the aim of the game. The main game board is double sided for different player counts, but the 3 to 4 player side has more attention to detail with artwork showing multiple people performing various farming tasks. The cards are excellent quality, larger than standard cards, and features imagery of greenhouses.

The service cards all have unique artwork, but due to the sharing mechanic, have lots of text on them that detracts from the art. The worker discs are a good size. I prefer them over the meeples as they are easier to see on the main board and generally more pleasant to handle. The stickers are a nice touch and help bring your worker discs to life. The best components are the vegetables and the cardboard baskets they come in. The vegetables themselves are chunky wooden pieces, and although they are a little unusual in their shape, the color helps make it obvious which vegetable they represent. The game also comes with spare cardboard tokens to represent extra vegetables if the supply has ever run out. Although, I have never had to use these in any of my plays.

The aim of the game is to be the highest on the tourism track after 7 rounds, with the player who arrived last being in the winner in case of a tie. Your turn consists of 4 separate phases. First is the work time phase where you place your 3 workers on the board and take the action listed on it.

There are 4 different columns of actions on the board to choose from. The first is the property spaces, which allow you to acquire greenhouses. These can be random or selected from the various sizes available; 3, 4, 5 and 6 parcels. The smaller greenhouses can accommodate and grow all five vegetables whereas the largest can only grow two types. There is however a limitation in this column. If you place a worker on a flagged location (marked on the board) you cannot place another worker in that column on another flagged action.

The market action allows you to gain vegetables and in some cases harvest.

The final column, town hall actions, is the most complex and involves two main types of actions.

The first is to discard greenhouses in front of you and put them back into the supply. Then you advance tables on the tourism track without paying the vegetables. The other spaces relate to service cards, which give you various immediate and ongoing benefits during the game. In the 3 to 4 player game these cards can be shared between neighbors using another worker placement space.

After you have performed your 3 actions you enter the harvest, where you simply take 1 vegetable from each greenhouse and place it in your supply.

In tourism time you may move your manager on the tourism track by paying the vegetables on the next table, such as 2 tomatoes to move onto the 2 tomato table. During this phase you must also take a bonus move where instead of paying the vegetables on the table, you gain that many vegetables instead. Tourism time is not carried out in player order. Rather, it occurs in positional order, with the player the furthest ahead on the track going first.

The game has a nice flow to it, with each player only only taking 21 actions. The game can be played with 1 to 4 players. The solo mode makes used of the 2 player side of the board, and you alternate colors each turn. This means you block actions for the next turn and you have to plan ahead a few turns in advance. There is also a story mode in the game that plays similar to a normal game, but with some small alterations or goals (e.g., have 7 carrots at the end of the game and you cannot claim carrots as a bonus). The story mode also introduces another phase where you play an event each turn. Events may be positive or negative, and will effect each player differently.

The game’s excellent arts and wooden components enhance the game, and help contribute to a more thematic experience. As would be the case in reality, you feel that your farmers can only do so much in a year (which I consider to be a turn). The cards give you improvements to make you farming better. They may also yield one off bonuses given to you by a friendly local person. You also really do feel like you are growing the vegetables as they fill your greenhouse (although this is highly accelerated), and then you feed tourists, which increase over the years as you feed people more vegetables and increase in fame. The Icelandic tourism board approves of this game.

The average playtime of the game is about 15 minutes per player, even when a player is playing for the first time. The game never drags since you know what actions you need to take each round. The game plays very differently at different player counts. I find the game to be good at 1, 3 and 4 players. At 2-players however, the game is very tight and more cutthroat than I usually enjoy. It is very easy to leave your opponent without any good actions. There is a 2-player only set of service cards that are more dependent on how workers are placed than the actions that are taken. It’s a good idea, but I didn’t find it to completely solve the problem. At other player counts, there are always good options (although some spaces are better than others and player order will become very important).

The game requires you to build an engine (or fleet of greenhouses) in the early game, seed and harvest efficiently in the mid to late game, before finally rushing to trade your greenhouses in for movement on the table track. This means the game is a little scripted in the first couple of turns. Although, I have seen people not take greenhouses for a couple of turns and still do very well. It just makes it more difficult to pull off. It’s most efficient to get vegetables and then plant them in the biggest greenhouse so that you can maximize the number of vegetables you yield. There is also the option to get small greenhouses and then turn them over as fast as possible (since you can play whatever vegetables you want in them).

If you get in front on the tourism track, you want to make sure you stay in front. If one person gets the same table as you at the end of the game you will lose to them. In most cases, players do end up on the same table, and I have seen multiple games won by whoever got to the table last. This can make positioning on the tourism track before the final turn very important. Sometimes taking the bonus can be beneficial even if you have the vegetables, especially if it is a rare type such a carrot.

The item that varies from game to game is the service cards. Firstly, there are 5 decks (one is 2-player only). These change the actions you take each round, and will make you more or less incentivized to go to certain spots on the board. If someone takes one of the action spots you wanted and you are playing the 3-4 player game, you can both benefit from the action if they are your neighbor. This happened every time I’ve played at these player counts.

The game is light weight as you only have one main objective, to move up on the tourism track and all your actions need to help this. The game is very simple to teach with the 4 separate columns of actions being very easy to describe. The rulebook is very good and well written with clear examples of when interactions may happen. The game does seem a little daunting as there are so many worker placement spots to go to but when it is explained to you it becomes easier. The setup time is about 5 to 10 minutes with a similar teardown with the main problem being the bagging of the vegetables. The iconography is very clear with the vegetables drawn well and the seeding and harvesting icons are very obvious.

In the solo game, the ‘story’ mode really shines. It keeps the game fresh. Although, advertising it as a story mode is a little misleading. It has very little in terms of a narrative element and the game board doesn’t change that much from game to game.

Reykholt is a pretty standard worker placement game. It plays in under an hour with a decent amount of decisions to be made. I think this game would serve as an excellent entry-level worker placement game for new board gamers, as well as an entry point for other Uwe Rosenberg games. 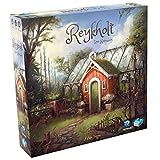 Reykholt
Check Price on Amazon
Note: Board Game Squad is reader-supported. When you buy through Amazon links on our site, we may earn an affiliate commission.