“If only I’d made a different move during my last turn, I’d have the resources I need to score enough and win,” I said slightly frustrated. My friend Dávid looked at me, and with a sheepish smile pulled out a glowing purple box. “I didn’t want to mention it, but this is the answer to your problem”. Bewildered, I inquired as to what it was. “It’s Anachrony, duh. You can’t take back past moves. But with the power of Anachrony, you can travel to another time, borrow any resources you need, and use them to dominate your current turn” said Dávid. “What’s the catch?” I asked with suspicion. “Well, if you fail to pay back those borrowed resources, you will cause a massive time paradox and kill us all. No biggie”.

Anachrony is a post-apocalyptic time travel themed worker placement game for 1-4 players. It was designed by Dávid Turczi and published by Mindclash Games. Anachrony was released in 2017 following the success of another heavy eurogame released by Mindclash, Trickerion: Legends of Illusion. Trickerion is perhaps my favorite worker placement game (or at least in a close tie between it and Tzolk’in: The Mayan Calendar), so even though it shares a common publisher, it has a whole lot to live up to.

The story of Anachrony is a riveting tale in which an unexplained cataclysm wipes out the majority of the world’s population. The survivors are split into factions of different ideals known as “Paths”—The Paths of Harmony, Dominance, Progress, and Salvation. At the 300 year anniversary of the cataclysm, giant statues composed of the newly discovered neutronium material are constructed as memorials. To everyone’s astonishment, the neutronium in the statues cause time rifts to open up all over the place—explaining what happened during the cataclysm 300 years ago and alerting the Paths to an impending asteroid impact. The asteroid that’s headed toward earth is the source of the time-travel-inducing neutronium, and it’s future impact is what caused the cataclysm centuries ago. The future is as grim as the past.

The Game of Anachrony // Review

As a eurogamer, theme is often the last consideration for me. But for myself and many others, the theme of Anachrony is one of the things that drew us to the game. Its unique, compelling, and filled with abundant lore. The artwork is gorgeous and marries the theme very well. However, Anachrony is your typical eurogame, meaning that despite some of the mechanics using the theme as mnemonic, it isn’t a particularly theme-rich experience. Now, that is not meant as a negative comment or dig at the game. Again, I’m primarily a eurogamer, so theme is always secondary to mechanics. And mechanically speaking, Anachrony is a true work of art. The depth of gameplay and the design of the game is droolworthy. If you value strategy and elegant mechanics, you’re in for an incredible experience when you open the purple box of Anachrony.

Anachrony is driven by conventional worker placement mechanics that are augmented with some unique ideas. For the most part, players are vying to place workers in actions spaces that will earn them resources. There’s an economy to those resources—some are scarcer than others. Resources may be more valuable to certain players based on strategy, variable player powers, and progression of the game. Being efficient with one’s actions is essential for maximizing scoring, and careful planning is necessary to achieve efficiency.

In order to use the action spaces on the main board, workers must first be placed in exosuits, during a previous phase. Some exosuits will be available for free, but others will require power cores to be spent in order to use them. To top this all off, once you’ve used a worker, he is returned to your pool in a sleep state, and must be woken up in order to be used again in a subsequent turn.

Although most of the worker placement locations are located on the main board, part of the game involves acquiring new building locations. Some of these provide ongoing powers for those who built them, but other will open up new, personal worker locations that may be accessed without exosuits. It really opens the game up and extends the actions beyond the finite opportunities of the main board.

There’s a fantastic amount of worker management that occurs in the game. It’s a very refreshing take on the mechanic, making it so that players manage workers as if they were a type of complex resource, rather than the simple pawns of most games. I love it.

In Anachrony, time travel enables players to complete “superprojects” and borrow resources they may need from other time periods. As debts are paid back, players earn victory points. But if they aren’t paid back, they may cause paradoxes and anomalies, resulting in the loss of points. Time travel is sometimes sold as the star of Anachrony, and although it is important, I wouldn’t go as far to say it’s what defines the game. Like many eurogames, it’s an optimization puzzle, and time travel is one of many pieces of that puzzle that players must leverage in order to maximize victory points.

After four rounds (or “eras”) have elapsed, the cataclysm occurs and the asteroid hits the earth, causing the game state to change. It’s all stand-up-at-the-table moments from this point on! There’s a race to earn points from evacuating, worker locations get blocked off, and all of the free exosuits disappear. It’s an exhilarating gaming experience with an end-of-game that feels appropriately climactic.

Due to the variable player powers, different end-game scoring objectives, alternative set-ups, and the Doomsday module (a sort of mini-expansion where players try and stop the asteroid impact from occuring), there is a great degree of variety and replayability in the base game of Anachrony. I can only imagine how much this will be further enhanced by the upcoming Fractures of Time expansion. I’m excited to give it a try when it’s released.

As someone who getting more and more into solo gaming, I’d be remiss not to mention the game’s excellent solo mode, Chronobot. The game’s designer, Dávid Turczi, is well known for designing solo modes for his games and others’ (e.g., Teotihuacan, Snowdonia Deluxe Edition, Coloma, Cerebria, and more). For someone who has confessed to not being a solo gamer himself, he’s very good at designing these systems. The solitaire game of Anachrony is very simple. Chronobot has his own player board and exosuits. There’s a progression for which players roll a die, and then take the corresponding action on the board, and then moves the numbered token to a new position. For such a complex game, it’s extremely easy to play and mimics another player very well.

Overall, Anachrony exceeded my high expectations. I’m not sure if it’s displaced Trickerion as my top worker placement game just yet, but it’s very close, and with more plays I can see it easily being a top 10 game for me. It has wonderful table presence, the gameplay is extremely fun, the rules are not that difficult to teach despite the complexity of the game, and it’s full of strategic depth and meaningful decisions. Anachrony is a game that I’ve fallen in love with. It very much deserves your attention.

You’re missing out if you don’t own it. 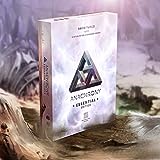 Anachrony Board Game - Essential Edition
Check Price on Amazon
Note: Board Game Squad is reader-supported. When you buy through Amazon links on our site, we may earn an affiliate commission.