Bus is a board game about picking up passengers, taking them where they need to be, pivoting plans when they go awry, and strangely enough—time manipulation. Most of all: it’s a game of careful planning. In keeping with that theme, and considering that you don’t know much about me as a gamer, I wanted to pick you up here at the beginning, traverse the winding road of my personal gaming history, and drop you off at how that has impacted my review of Bus. Don’t worry – we won’t be on that road for long.

My time with board games started in the early 80s. I was fortunate enough to be born into a family that appreciated sitting at a table and throwing cards around. Of course, we had a closet full of Milton Bradley titles, but my fondest memories were spent playing Uno and Chess. It was these early years that I learned how to plan ahead, appreciate being outplayed, how to win humbly, and lose (quite often) with grace. During the 90s, I graduated to Magic: The Gathering and Dungeons & Dragons, playing with my brother and friends. Starting around high school and well through college, my attention predictably turned away from gaming and toward my social life. I’m not complaining since this is when I met, fell in love with, and married my best friend. In 2007 our family leveled up with the addition of our son and any social life we had quickly disappeared. Don’t worry though, kids only keep you from your social life for a little while.

One of my first times out of the house following the birth of my son, was born was to go visit a couple friends I hadn’t seen in awhile. They had been getting together with one of their co-workers who had started introducing them to newer board games. I had no idea who this friend was, and sitting down to play Monopoly didn’t really interest me, but my wife encouraged me to get out of the house. Obviously, she was wise beyond her years. After arriving, we caught up with one another, I met my new friend Andy, and had a drink. Finally, we decided to sit down and play. Andy carried a giant storage bin from his car. It was overflowing with modern board games. I don’t recall all that was in this bin, and it’s hard to remember the night clearly now that it has been over a decade, but I can tell you how I felt after getting home. That night we had played Small World. I didn’t do well (to no ones surprise), but I stayed awake all night replaying the game in my head: “What if I had used this other race?”, “What if I had gone into decline one round sooner?”, and the all too important “This is how I can do better next time”!

During the next dozen or so years, my tastes grew, diverted, and included genres I didn’t expect to enjoy. My favorite games are still medium to heavy weight euros, with my top 3 board games being Lignum, Rockwell, and Brass: Birmingham. The point of dragging you through all of this personal gaming history is to give you perspective on my review of Bus: 20th Anniversary Edition. Bus was originally released in 1999 by Splotter Spellen, a few years prior to my evening with Small World. If you are familiar with Splotter’s games, you will know that they tend to be simple to learn, deep, rich with strategic options, and above all unforgiving. Their designs are often heralded as “elegant”, and for good reason. They are well-thought-out, sufficiently play-tested, and refined designs. There’s no bloat to be found in a Splotter game. Bus is no exception. Many parts (I dare say all parts) of the game feel engineered; tooled within a micrometer of tolerance. Everything fits exactly where it needs to be. The rulebook not only teaches the game well, but also serves as an easy reference, which in my experience is a rare occurrence. I am not going to teach you the game here, but I have to at least “drive by” the mechanics.

A game of Bus lasts an undetermined number of rounds, with players starting the game with twenty action markers. These markers represent the number of actions you will be able to perform for the entirety of the game, so you will have to plan and use them wisely! There are seven types of actions you can perform every round. Since more can be done with a single action point later in the game, it may seem advantageous to hoard them for later rounds. But one must be cautious in doing so. Players can end the game on your earlier than you expect, leaving you with unused actions and behind in the game.

Bus is a relatively low-scoring game. My current high score is 6, and after looking into what other players have scored, that sounds fairly typical. Players can use their actions to add passengers out on to the map, place destinations for the passengers, deliver those passengers, extend their bus route, increase the number of buses in their fleet, take the obligatory first player marker, or in a bit of a twist: control time. Yes, you read that right.

Each round, time continues as expected: If people are at home, they want to head to work. If they are at work, then reasonably they want to head to the pub, and afterwards, they want to go home (in the following round). Passengers will always want to go to one of these three locations. However, one player per round has the option to freeze time. When time is frozen passengers will want to go wherever they wanted to in previous rounds. Timing this properly is importance for scoring. For instance, a passenger that is already at a pub won’t be transported if they are already at a pub. Therefore, that passenger will not earn the player any points.

The remaining actions all work in unique ways, and as previously mentioned, get increasingly more beneficial as the game progresses. The number of times you activate an action depends on two things: 1) how early you place your marker, and 2) the maximum number of buses any one player has. The placement of the markers happens first, then once all players have passed, they resolve. In terms of theme, the most out-of-place action is the clock that can be used to stop time. Sometimes you will want to pause time in order to prevent other players from scoring points. But if you are clever, you can set yourself up to transport passengers to the same destination in the prior round, since your opponents have already brought passengers to these places. Since pausing time comes after most of the other actions, being able to do so puts the player in an powerful position.

You will likely have the desire to do all of the available actions every single round, but as it is in good game design, you won’t be able to and it will make your soul hurt. In a blog post from 2004 about game design, Johnathan Degann wrote: “It’s not about solving a problem that is so complex it hurts your brain. It’s about confronting a problem that has no solution. The agonizing decision doesn’t hurt your brain. It wrenches your gut”.  This is absolutely describing Bus. There are moments in the game where it only makes sense to extend your bus route, but most of the time, you will be stuck making impossible choices. It’s just as beneficial to put out destinations for your passengers as it is to add another bus to your fleet, or even place more passengers on the map since any of these will gain you the same number points at the end of the round. What you more often end up considering is what you are leaving available to the other players. This is yet another bullet point of where Bus shines – so many games are either multiplayer solitaire or sessions of what appear from the outside to be recreations of the New York Stock Exchange trading floor. This game rides smoothly in the middle of a well paved road, rarely veering into either of those lanes for too long.

If you have made it this far (thank you), then you are falling into one of two camps. You are intrigued and want to play Bus – in which case I encourage you to seek it out and try it. I doubt you will be disappointed. The rest of you however want to know what I think. You shouldn’t care, but my role as a reviewer requires this regardless of how it wrenches my own gut. Bus is technically an amazing game. But it committed the cardinal sin of gaming in my opinion which is: it wasn’t fun. No one was more surprised by this than myself. Capstone Games has created a beautiful reprint of Bus for its 20th anniversary, and after having read the rules and watching a couple of how to play videos, I was giddy with anticipation to get this game onto the table. This was a game that was Shut Up & Sit Down’s game of Pax Unplugged 2019. How could it possibly be a miss? The same way The Beatles aren’t enjoyable to me.

Are you ok? You blacked out for a minute. Obviously, I owe you more of an explanation. So, here it goes. The Beatles redefined rock and roll. They shaped music for the next… well they are still impacting music today, and will continue to impact music for the foreseeable future. However, that doesn’t mean they are the best band out there, or that their singles are still the best examples of rock and roll today. They deserve our admiration, respect, and gratitude, as does Bus. But that doesn’t mean I will enjoy listening to someone recorded in the 1960’s singing “coo coo kachoo” today. Bus has elements that individually are interesting and clever, but the experience as a whole wasn’t enjoyable for me. In a world where I can grab one of the dozens of amazing games off of my shelf that I know with certainty that I will enjoy, I have no reason to play Bus again. It never even came close to giving me that feeling that Small World and so many other games through the years have. I didn’t stay up all night thinking about how I could have played better, wondering what else the game had to offer. I felt like I experienced everything that could come from it. No doubt there are efficiencies to be discovered, and an expertise to be achieved here, and for some people that is where the fun lies. For those of us that find fun in the exploration of rulesets though, I would wait for the next vehicle that catches your eye. 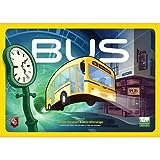 Bus
Check Price on Amazon
Note: Board Game Squad is reader-supported. When you buy through Amazon links on our site, we may earn an affiliate commission.

Adam Reynolds is a co-host of the Board Game Squad Podcast. His time gaming is mostly spent asking to play games no-one else wants to play, and then making poor decisions in any game he does play.