Oh no! There’s been a rise in theft of ancient artifacts and it’s up to you, an archaeologist vying for prestige. You must collect these artifacts and return them to their rightful place in museums. But alas, competition is fierce amongst archaeologists, as there’s a position at stake at the university. If the odds weren’t already stacked against you, there’s a bounty hunter afoot who also seeks these treasures. Can you find and return the best collections of antiquities and appeal to Professor Nigel Remington? This is your quest, your Antiquity Quest.

Antiquity Quest by Grandpa Beck’s Games is a card game for 2 to 8 players (larger player counts are accompanied by alternative rules for pairing-up). Players compete to score points by forming collection of cards. Some of these sets are worth more than others, with the granddaddy of them all being the “Perfect Collection”—a set of five cards, either one of each Treasure Cards (worth 1500 points) or each numbered Antiquity Cards of a single suit (worth 1000 points). As you form collections, you and your opponents will also be working to sabotage each other by adding undesirable cards to the collections of others.

Antiquity Quest is a re-imagining of a classic playing card game called Hand and Foot, a derivation of Canasta which is in the Rummy family of card games. If you’ve played any of these games, then Antiquity Quest will obviously feel very familiar. But in my opinion, Antiquity Quest has a lot to offer over playing one of these tradition card games.

The art is not only more aesthetically pleasing, but it also makes the game easier to parse. The spades, clubs, and jokers in a traditional deck of playing cards, for whatever reason, just feel more abstract and less intuitive than gems and ancient artifacts for me. As minor as it is as a design decision, it works and I’m a fan.

The rules changes also add depth of strategy with the Remington and Tess cards. In the game, players are allowed to take the entire discard pile if they are able to form a collection with the top card. The Tess card disrupts this, removing the cards the cards found within discard pile from the game. In contrast, the Remington card allows a player to draw 3 cards when it’s played and is worth 100 points at the end of the game.

Antiquity Quest is highly versatile and you’ll find that it clicks with many different kinds of groups—you can easily play with your grandmother (especially the basic game), your non-gamer family, or with your fellow hobby board game enthusiasts. Although, for the more serious board gamer, I’d recommend skipping the basic rules and playing the advanced rules.

The advanced rules add a bit of meat to the game which I very much appreciate. Each player aid has a Basic and Advanced side. On the back of the Advanced side is a hidden Civilization Bonus. Essentially, a player scores additional points at the end of the game if their collections include Antiquities of the type depicted on their player aid. It’s such a cool and simple addition to the game that I absolutely adore. In addition to this bonus, the Remington and Tess cards have added powers. In addition to their old effect, Remington cards also allows you to trade one of your completed collections with one of the same time of your opponent’s—thus potentially allowing you to gain an additional Civilization Bonus. The Tess cards now allow to destroy any incomplete Antiquity or mixed collections. The new Tess power, combined with the existing sabotage in the game, adds a much desired amount of take-that for this competitive gamer.

Overall, I really enjoy Antiquity Quest. It’s a game I don’t mind introducing to new gamers, eurogame snobs like myself, or bringing to family gatherings. The art is beautiful, it looks nice on the table and it’s easy to throw in my bag. if you’re looking for a fun little game that satisfies a vast array of individuals, you’d be remiss not to give Antiquity Quest a look. 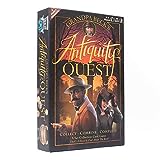 Antiquity Quest | A Set Collection Game from The Creators of Cover Your Assets & Skull King, Grandpa Beck's Games | 2-8 Players 10+
Check Price on Amazon
Note: Board Game Squad is reader-supported. When you buy through Amazon links on our site, we may earn an affiliate commission.