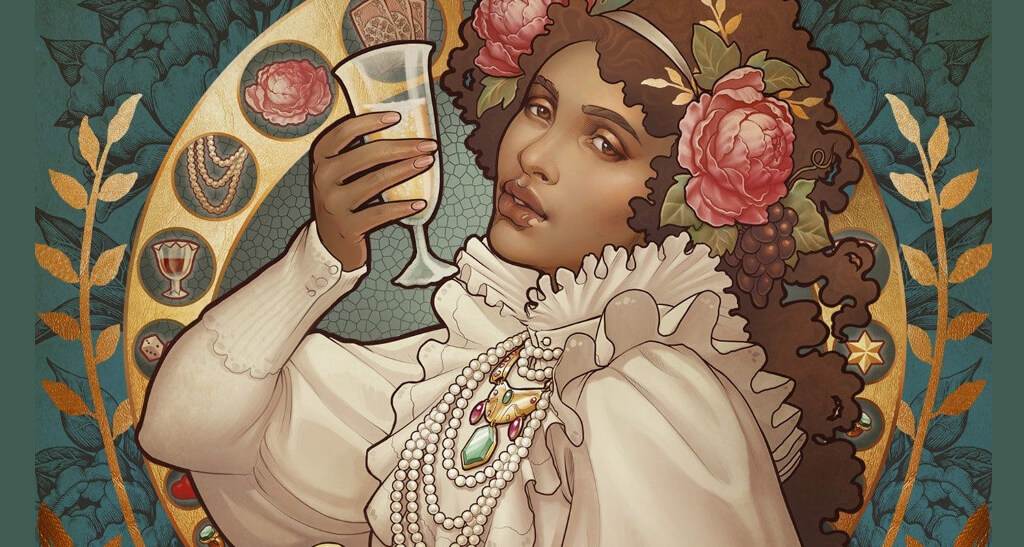 I love auction games. They feature a game mechanic that can trace its roots all the way back to 500 B.C., when it was used for commerce among ancient societies. It’s a system that has stood the test of time, powering businesses such as eBay, Southerby’s, and Google. And as a result, most people already understand how auctions works and can easily grasp a game that uses bidding as a mechanic. Auction games are intuitive, great for new and experienced gamers alike, cut-throat, and deeply strategic. High Society is no exception. Let’s dive in!

Game Overview and How to Play

High Society is a small card-based auction game designed by the great Reiner Knizia (who also designed all of your other favorite auction games).

It was originally released in 1995 and was recently re-published by Osprey Games in 2018 with absolutely gorgeous new art by Medusa Dollmaker (Asuncion Macian Ruiz).

It takes 3-5 players and lasts about 20-minutes.

In High Society, you compete as wealthy socialites with the goal to live as lavishly as possible in order to impress their peers.

Players bid on status cards, some of which represent high-value luxury items like jewels or champagne, used to earn the envy of others. These have point values on them.

Hidden within the deck are three prestige cards that augment your status, as well as three detrimental disgrace cards.

The player with the greatest status at the end of the game wins, but beware the poorest player will be shunned and cast out, removed from the game and ineligible to win.

Everyone is dealt their colored money cards. The denominations are a bit odd, ranging from 1000 to 25,000 Francs.

The denominations add to the hand management aspect of the game, which will make more sense as I explain more of how it works.

The sixteen status cards are shuffled, these include the ten luxury cards with point values on them, the three green-backgrounded prestige cards, and the three disgrace cards (one of which also has a green background). The player who shuffled this deck become the starting player.

A card is drawn and revealed from top of the status card deck.

If the card is a luxury or prestige card the start player initiates the auction and players continue bidding clockwise by placing money cards in front them. You must always increase the bid and should announce the total monetary value.

This continue till all but one player has passed, with the remaining player winning that status card and discarding the money card(s) he has bid. Those who lost the auction may return the money cards they bid to their hand.

The player who won the auction becomes the starting player and draws the next status card from the deck.

Luxury cards are additive, increasing your overall status. As I mentioned there are ten of these cards, ranging from 1 to 10 without any duplicates. So if you’ve won the bid for a 2-point and 10-point luxury card, your status would be 12-points.

The three prestige cards on the other hand are multiplicative, but do not have a point value unto themselves.

Each prestige card doubles the point value of your other cards.

And believe me, the disgrace cards are bad. You don’t want to take any of them!

Here’s what the disgrace cards do your status:

Unlike prestige and luxury cards, when you bid not to take a disgrace card, that money is lost. You do not reclaim it. If a player no longer wishes to bid and chooses to pass, they must take the disgrace card. Ouch!

A game of high society ends when the fourth status card with a green background is revealed. You do not bid on this card, the game simply ends.

When the game ends, everyone reveals how much money have remaining. The player(s) who have the least amount of money are cast out, removed from the game and are ineligible to win regardless of how many points they have earned from status cards. How embarrassing!

Among the remaining players, status points are totaled up, adding luxury cards together, multiplying by and prestige cards, and reducing any points from disgrace cards.

The player with the most points that has not been cast out wins!

I mentioned that the odd denomination card adds to a hand management dynamic during the game. Every bid, you must bid higher than the previous bid, which means potentially using multiple of your finite money cards.

You cannot make change. So, if you put down 10,000 Francs as an opening bid and want to later increase it to 15,000 Francs and no longer have your 5,000 Franc card left in your hand, you’re out of luck. You’ll likely have to bid higher than 15,000 Francs to stay in the running.

It’s not a very obvious aspect of the game if you haven’t played it before. But if you have, you know how critical it is. It’s one of the things I like most about the game.

Prestige cards can make or break a game of High Society. Obviously, they can substantially increase your end game points. They double everything!

Because all of the prestige cards have green backgrounds, you may not have an opportunity to bid on all of them if it’s the fourth one drawn. It adds an element of push-your-luck to the game. Do you bid heavy on a prestige card if it comes out? Or do you wait and see if you’ll see if another one comes out and bid more on that one once your opponents?

Disgrace Cards and Being Cast Out

The possibility of being cast out is very real in a game of high society.

Available money is hidden information. You can deduce some of what people have left in if you’ve paid close attention to the game, and the other players haven’t repeatedly bid with the same money cards, but it’s certainly challenging.

Even if you’ve accumulated the most points, it’s very easy to still lose the game. It’s a fascinating balancing act of spending money and holding on to just enough not to be last.

It makes for some frustrating and exciting end game experiences.

This reprint from Osprey Games has some of the most beautiful card art I have seen from any game. It’s vastly improved production from the previous printing from Eagle-Gryphon Games in 2008. It really pops on the table.

The over-sized status cards are fantastic. They really highlight the art and it feels really satisfying to fan a few of them out in front of you.

I love that money comes in the form of cards and thing the color selection for them is truly superb.

The only thing that would have liked to see is a thicker card stock, but that would be a lot to ask for from such a beautiful game with an MSRP of $20.00.

Due to people’s familiarity with auctions and the underlying mechanics, the rules explanation is minimal, reducing the teaching time for new players.

It’s a ruthless game with high player interaction and a ton of strategy, that definitely can help break the ice before diving into a heavy eurogame.

High society is a great game. It’s a good option to play with non-gamer friends and is easily my go-to filler game.

High Society
Check Price on Amazon
Note: Board Game Squad is reader-supported. When you buy through Amazon links on our site, we may earn an affiliate commission.