The Coricancha in Cusco, Peru contained five temples, including the highly significant Temple of the Sun, making it the center of religious life for the Incan empire. As such, it is also the center of Tawantinsuyu: The Inca Empire.

Tawantinsuyu: The Inca Empire is a 1-4 player worker placement game from board game designer Dávid Turczi of Anachrony fame from publisher Board&Dice. It’s yet another entrant in the “T-Game” series including games such as Teotihuacan, Trismegistus, Tzolk’in, and Tekhenu.

Unlike the other “T-Games” to date, it was designed by David Turczi instead of Daniele Tascini. So, whereas the other T-Games involve dice, a signature of Tascini’s designs, Tawantinsuyu does not. Instead, Turczi has created a rather original take on worker placement à la Tzlok’in. Tawantinsuyu features relatively simple rules with one heck of a complex decision space. Those prone to analysis paralysis should be warned, there’s a lot to consider on a turn. If you aren’t prone to AP however, the game is smooth and plays relatively quickly.

At the center of the main board is a three-tiered pentagon littered with worker placement locations. This represents the Incan Coricancha. Surrounding each worker location are three tasks you may have an opportunity to preform. The number of tasks you get to perform depends on which kind of worker you place there and if there are nearby workers of the same color. The various types workers have different abilities ranging from gaining additional tasks when placed on a particular colored location to a worker that allows you pick up a worker that’s already been placed (they otherwise stay there permanently).

In order to place any worker, you must exchange a god card of a matching symbol to what’s on the board from your hand. You may place a worker on any open spot, but the cost changes based on how far away your worker is from your priest in the center rondel of the Coricancha. The cost goes up as you move around the pentagon, away from your priest, as well as when you descend to a lower tier. Certain locations can be quite pricey, but as you’d expect with a good euro, there are ways to reduce the costs (purchasing stairs). Overall, you’re doing a decent amount of math for many of your turns. It’s simple math, but when paired with all of the implications, future planning, and other things going on the game, the decision tree spread wide and every branch adds to the mental load of decision making.

There are some other things going on in the game as well. Instead of placing a worker, you may perform two secondary actions. Such actions are moving your priest (which triggers other actions) around the pentagonal rondel or conquesting, a sort of area majority mini-game. There’s tiles you can acquire that grand permanent or one-time abilities, a tableau of tapestry tiles you compile that grants you points and resources bonuses, a temple track you can ascend upon, and statues you may acquire to earn you bonuses when placing workers.

Many of the actions allow your opponents to “follow” your actions, giving them the same opportunities on your turn, albeit at a great cost than if they were the active player. It is for this reason that the game is weakest at two-players and although it’s still a good game, you miss out on a lot of the player interaction and makes a number of strategies (i.e. worshipping and conquesting) much more difficult to pursue.

Tawantinsuyu comes with a solo mode. It’s your typical Turczi-style automa solo mode, with it’s own distinct set of rules for the automa. If you take the time to learn how to run the automa (6-pages of a 27-page rulebook), then you’re in for a game that is both challenging and rewarding for solitaire gaming. As I’ve grown as a solitaire gamer during the 2020 pandemic however, I have found this system to be less and less appealing. It’s not that it’s a bad system, it actually has a very good feel to it. I just feels onerous to learn the additional reviews. At the end of the day, this is more of personal opinion, rather than a critique of Tawantinsuyu’s solo mode in particular.

The rulebook of Tawantinsuyu is phenomenal. I usually dread reading rulebooks. They’re boring, it’s not uncommon for them to contain errors, or for them to describe things in the most round-a-bout way possible. Possibly due in part by the straight forward rules themselves, the rulebook made jumping into my first play a relatively seamless experience. I didn’t have to check BoardGameGeek once for clarification. This of course was made easier by the excellent player aid that is included with the game.

Highly recommended for its unique take on worker placement 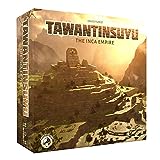 Board & Dice - Tawantinsuyu: The Inca Empire - Board Game
Check Price on Amazon
Note: Board Game Squad is reader-supported. When you buy through Amazon links on our site, we may earn an affiliate commission.